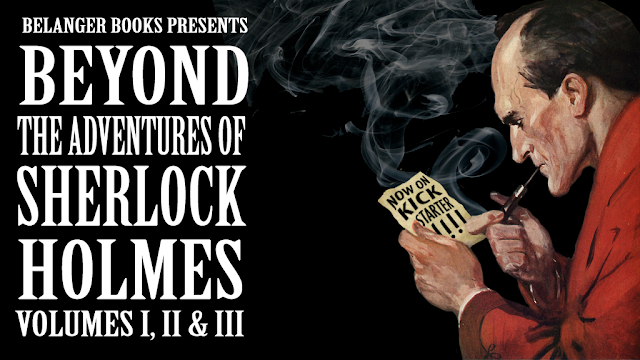 As always this is a packed blog update. We've got a FREE Sherlock Holmes eBook (Sherlock Holmes and the Occult Detectives Volume Two), a CALL for SUBMISSIONS to TWO new Sherlock Holmes anthologies as well as the latest volume of The Pontine Dossier: Millenium Edition, two Kickstarter projects, and Not Forgetting Adele on Indiegogo.

Let's start with the crowdfunding.

Beyond the Adventures of Sherlock Holmes 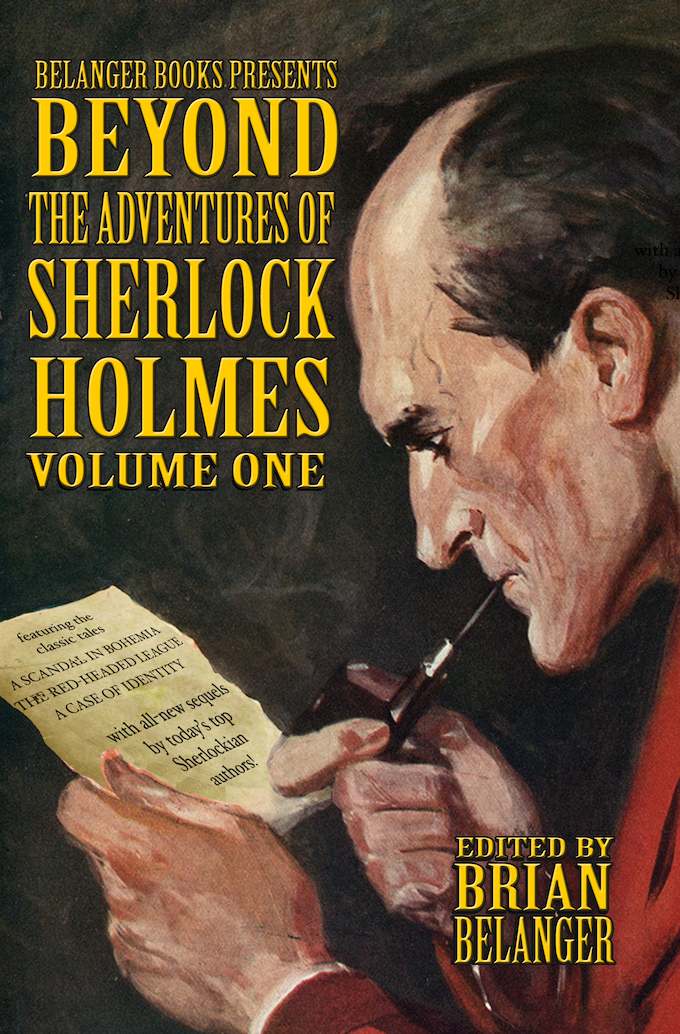 This special three-volume edition of The Adventures of Sherlock Holmes reprints each one of Sir Arthur Conan Doyle's cases from that classic collection, and then goes a step further.  Each original tale is paired with an all-new sequel, spinning our hero off into plots and directions that Sir Arthur may never have considered.
In many cases, years have passed by since the events of the canon.  Holmes and Watson find that people change.  New facts are uncovered.  Some characters aren't as dead as one might have assumed!
Intriguingly, many stories have multiple sequels!  How did your favorite adventure end?  Depends on who you ask.  Holmes, to his credit, rises to the challenge every time!
Check out this incredible collection of all new Sherlock Holmes sequels by CLICKING HERE!

Not Forgetting Adele - A Gothic Mystery Sequel to Jane Eyre! 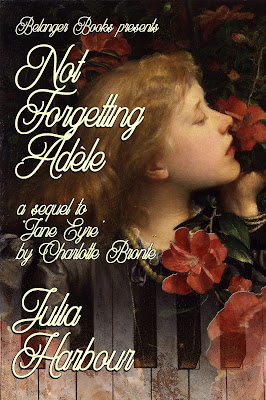 Rich with breathtaking surprises, NOT FORGETTING ADELE is a gripping tale of a young woman whose courage and determination changes the lives of everyone around her.  Like its predecessor, JANE EYRE, NOT FORGETTING ADELE will find a place in all our hearts.
Statements of Advance Praise
"Julia Harbour has done something few writers can, she has taken a piece of respected classic literature and added to it in a most delightful manner." - Amazon Vine reviewer (5 star review)
"An enthralling read that takes us on a voyage of mystery and romance from familiar shores to foreign lands, and is sure to delight any fans of Jane Eyre who ever wondered: what happened next?" - S.F. Bennet, author of The Secret Diary of Mycroft Holmes
"Harbour knows her Victorian England and give us scenes that ring true. Her characters are well-rounded—and full of surprises." - Elizabeth Varadan, award winning author of the cozy mystery Deadly Vintage
Back the project on Indiegogo today by CLICKING HERE!

From our friends at MX Publishing! 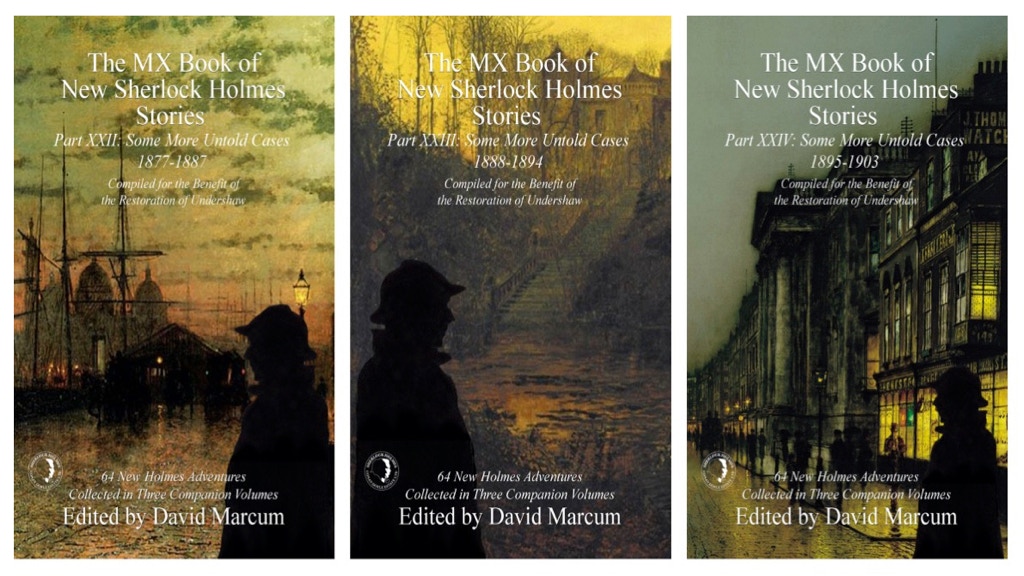 Throughout the original Holmes Canon, there were hints and teases of other intriguing cases – The Giant Rat of Sumatra . . . The Abernetty Tragedy . . . The Manor House Case. Watson mentions well over one-hundred of these, which have collectively come to be known as The Untold Cases. Now, once again MX Publishing brings us sixty-four of these adventures in three simultaneously published volumes, with all royalties going to support the Stepping Stones School at Undershaw, one of Sir Arthur Conan Doyle’s former homes.
Find out what happened in these untold tales! Back the project by CLICKING HERE! 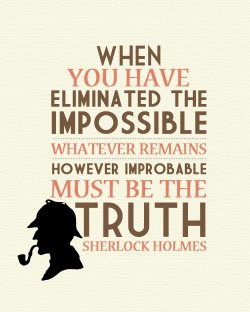 Guidelines: These traditional Sherlock Holmes adventures are sure to be a lot of fun.
For Sherlock Holmes: Stranger than Truth Holmes's client is a real historical figure. It could be Queen Victoria, Billy the Kid, President Harrison, The Dalai Lama, Nellie Bly, Laura Ingalls Wilder, or any person who lived during the time Holmes and Watson worked together.
For Sherlock Holmes: Stranger than Fiction Holmes's client is a fictional character. It must be a public domain character and fit in with the Victorian/ edwardian time frame of Holmes and Watson. Perhaps the client is an elderly Oliver Twist or a young Dr. Caligari. Twain's Pudd'nhead Wilson could be visiting London and need help from a detective. Maybe Alice needs help finding Wonderland or Dorothy returning to Oz.
Submissions:  Sherlock Holmes: Stranger than Truth - Stories must fit traditional Holmes. Submissions should be 5,000 – 10,000 words in length (it is okay to go over or under some). Since these cases involve historical figures they should be canonical in nature. Holmes and Watson must be their traditional selves.
Sherlock Holmes: Stranger than Fiction -  Since these stories involve fictional characters, you have some leeway in adding elements of fantasy, horror, and science fiction (i.e. if you use Dracula, or the Time Machine, or Wonderland's Red Queen). Even with this leeway, Holmes and Watson must be the traditional Holmes and Watson. They must act as they would in the original canonical adventures.  Submissions should be 5,000 – 10,000 words in length (it is okay to go over or under some)
Payment for both anthologies: Authors shall receive a payment of $100 OR $50 plus a percentage of the Kickstarter project profits (whichever amount is GREATER) and a paperback copy of the anthology.
Rights: Authors shall retain rights to their work. We only retain the rights to the story within the publication.
Submission deadline for both anthologies is December 31st, 2020. Authors are welcome to submit stories to either or both anthologies.
Send submissions in a word document to derrick@belangerbooks.com with the heading ATTN: SUBMISSION FOR STRANGER THAN TRUTH or ATTN: SUBMISSION FOR STRANGER THAN FICTION. 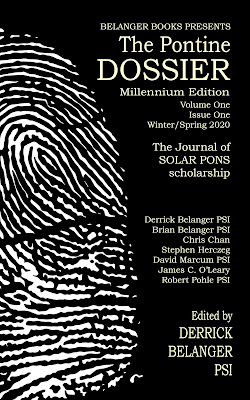 The next volume of Solar Pons Scholarship from Belanger Books!
Belanger Books is proud to bring back The Pontine Dossier in an annual edition.  The Pontine Dossier: Millennium Edition 2020 will feature Pontine articles and scholarships.  We would love it if you'd consider contributing.
Submission guidelines:  An article of Pontine Scholarship about Solar Pons, characters in the Solar Pons canon, or author August Derleth.  Length can vary from as few as 1,000 words to as much as 5,000 words. We are leaving this wide open to get as many and as varied submissions as possible.
Please submit your manuscript to derrick@belanger books.com. Title your email: ATTN: PONTINE DOSSIER SUBMISSION
If your article is accepted, you will receive a free print copy of the Dossier.
Deadline:  Please submit your article by November 15, 2020.  We hope to release the new edition of the Dossier in December. 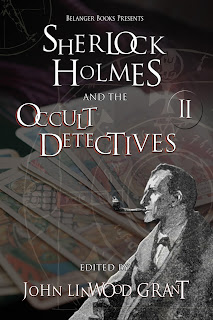 Free on Amazon until October 2nd!
In these pages, a range of contemporary authors explore 'what happens next' when the Great Detective confronts mysteries which question reason. A summons from Irene Adler’s daughter; a chance encounter with one of Houdini’s fraud investigators; the enigma of Dr John Silence. Mysterious events at Mary Morstan’s old school, and a threat to Queen Victoria. The return of the German agent Von Bork, somewhat changed, and a desperate hunt for a killer through the alleys of London with none other than Professor Van Helsing.
Join us in the second volume of this two-volume anthology as Holmes finds himself working with psychic investigators old and new in pursuit of answers, and must confront his own scepticism. Tales in the traditional style – but with a twist. Can Holmes’s logic work alongside the occult detectives’ willingness to embrace another set of rules entirely? Paranormal – or poppycock?
Get your FREE copy of this best selling eBook by CLICKING HERE! 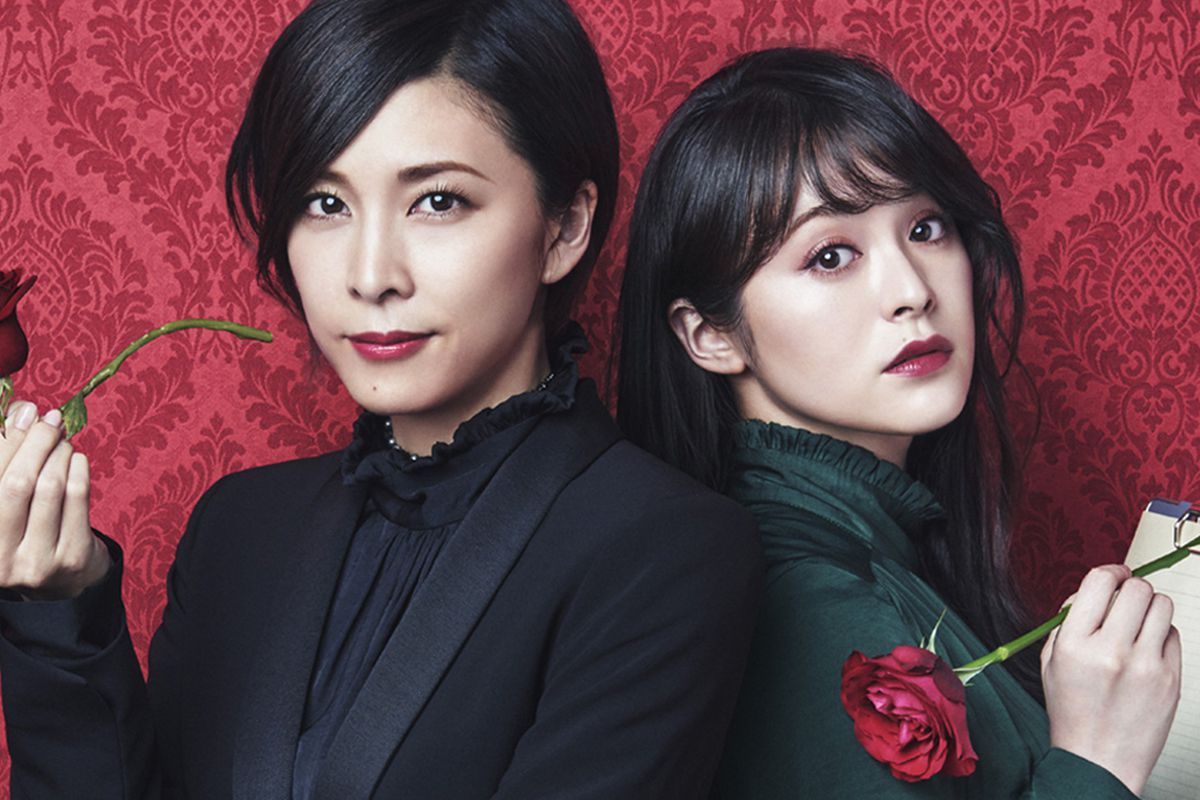 I was deeply saddened to hear of the death of Yuko Takeuchi this past weekend. Ms. Takeuchi was a talented award winning actress who was superb in her role as Miss Sherlock. Out of all the modern versions of Sherlock Holmes, hers was my favorite. She will be greatly missed.
That's our update for this week. Stay tuned for more exciting news from Belanger Books.
Belanger Books is a small press owned by artist Brian Belanger and author Derrick Belanger specializing in new Sherlock Holmes books, Solar Pons, Children's books, Classic Sci-fi, Steampunk, and genre specific anthologies.  Some of our books have been #1 bestsellers in their categories on Amazon.
call for submissions free books free ebooks gothic romance jane eyre kickstarter Miss Sherlock mx book of new sherlock holmes occult detective solar pons Yuko Takeuchi

Popular posts from this blog 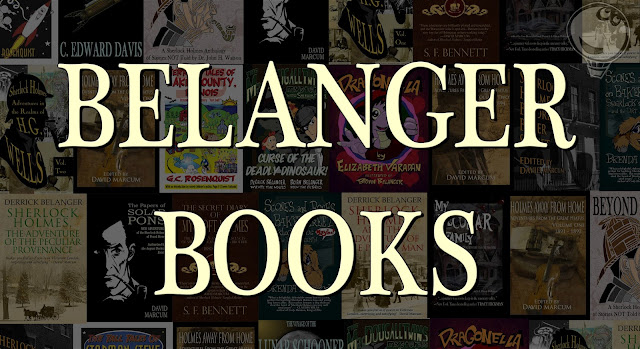 Dear readers, As you know the Covid-19 Virus has upended life throughout the world. With many schools now closed for weeks, we wanted to offer an activity for students and parents alike to complete at home as well as free eBooks to help pass the time away at home. Each week for the remainder of March and into April we will have at least one eBook available for free on Amazon. The books will come from our catalog of Sherlock Holmes, Solar Pons, sci-fi, and children's books.  This week, we have three FREE books. One is a Sherlock Holmes book, one a Solar Pons book, and one a story collection for children. Before we tell you the titles currently available, we want to let you know of a writing contest perfect for students and adults alike. In the Footsteps of Sherlock Holmes and Dr. Watson Have you ever wanted to write a mystery? Ever wanted to have your writing published in a book read all over the world. Now is your opportunity!  Belanger Books is accepting
Read more

Belanger Books continues to offer free weekly eBooks during the month of April to provide reading material for those of you currently under lock down due to the Coronavirus pandemic. For this week, we have both a free Sherlock Holmes eBook and a free Solar Pons eBook . For a brief 48 hour period, we also have the illustrated steampunk novella The Voyage of the Lunar Schooner for a free download.  This Week's Free eBooks The Papers of Solar Pons Solar Pons was created by August Derleth in the 1920s as a continuation of the Sherlock Holmes canon. Derleth, who famously created Arkham House Publishing to preserve the writings of his friend, author HP Lovecraft, had corresponded with Sir Arthur Conan Doyle, asking whether Doyle would be providing any new Holmes adventures. When Doyle said no, Derleth determined to write some himself. However, instead of writing more Holmes tales, Derleth came up with Solar Pons, a detective very similar to Holmes, and Dr. Lyndon Parker
Read more